Directories NOT to copy : filtering syntax

Directories NOT to copy : filtering syntax

in the "Directories NOT to copy" dialog box, it only keeps "MP3" in the list, and not the full path!

Should we use quotes " ", not quotes ? Something else? 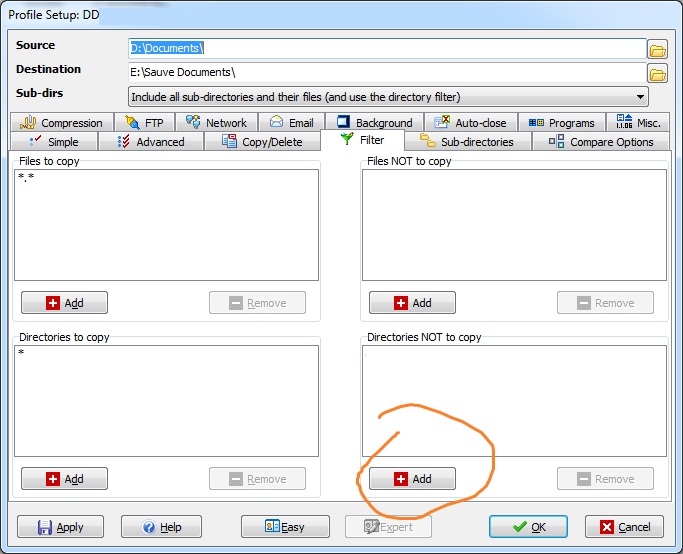 Re: Directories NOT to copy : filtering syntax

Any idea about how it works?
Top

Re: Directories NOT to copy : filtering syntax

1) You appear (from your screenshot) to be using the old (obsolete for several years) SyncBack V3 freeware, and not the current freeware SyncBackFree (current official release version number V8.5.72.0). It is highly unlikely you will get any answers from any other users of V3 nowadays, likewise answers may be unlikely from users of V8 who have never seen V3 before.

I would suggest the limitations on freeware assistance from 2BS themselves apply even more to an obsolete product...

2) The above tends to suggest that you would do better to upgrade to SyncBackFree, despite there being (IIRC) some discrepancies between V3 & V4+ regarding folder selections, as the V4+ folder\file-selection (also filtering) engines were radically changed/uprated. IIRC if SyncBackFree V8 installation* detects a previous V3 install you should be prompted about this with suggestions as it tries to convert your existing profiles, but if this fails, or the resulting V8 profiles seem not to work as they did previously, I suggest simply delete/re-create such profiles 'from scratch' in V8

3) Consult the radically-expanded Help in Free V8 re Filtering (also file/folder de-selections, which you can now use simultaneously/interacting with Filters, unlike V3 IIRC from that long ago, where you could only use Filters or (De)Selections) in any single profile). Note there are many Filter examples as background. A couple of points to bear in mind are that

b) you should not use quote characters for (in) Filter entries

c) folder de/selection in V3 (known as 'Subdirectories') was expanded in V4+ to include de/selection at the individual file level also. It is shown in the V8 Modify screen of a profile as 'Choose sub-directories and files'


* do not try to install SyncBackFree V8 'over the top' of V3 freeware (that is to say, into the V3 program folder on C). Use the default install folder for V8 that the installer will suggest. You can optionally uninstall V3 after the profile conversion (import) has completed.
Top
Post Reply
3 posts • Page 1 of 1